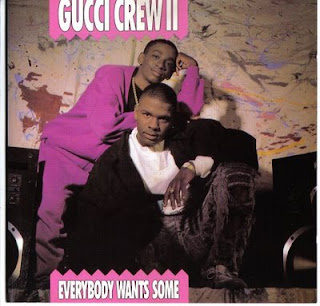 As a duo, Gucci Crew began work on their third album, "Everybody Wants Some" in 1989, utilizing Hot Productions' in house producer, Larry Davis. Davis had not only been a member of the highly successful Disco-Funk group Instant Funk, but had produced national hits for Gucci Crew's label mates L'trimm the previous year, which led L'trimm to a licensing deal with Atlantic Records. In a maximum effort promotional campaign, Hot Productions bought time for an interview on B.E.T.'s "Rap City" video show for both L'trimm and Gucci Crew. Despite all the effort, "Everybody Wants Some" failed to impress Gucci Crew's core audience, and it also failed to attract new fans. Tensions between the group and the label came to a boil.