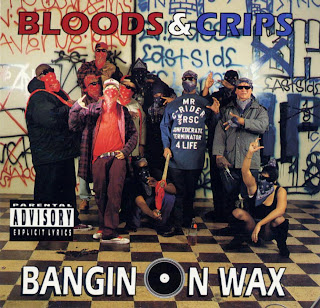 Eazy-E was a Kelly Park Hustler (AKA) Kelly Park Compton Crip during his teen years, and he openly associated himself with other Crips. MC Ren,Tweedy Bird Loc, and Lil Nation of CPO were among their members. AWOL, Crip Inch, Do Or Die, K-Tone,& Sin Loc from the Nationwide Rip Ridaz was also affiliated with the gang before his death. The Rip Ridaz were in collabo with the Damu Ridaz, Blood gang members and created the bangin on wax albums. Eazy didnt appear on this collaboration.

The Damu Ridas - The Damu Ridaz were an assortment of Bloods gang members from South Los Angeles and Inglewood, California.