The Geto Boys - We Cant Be Stopped 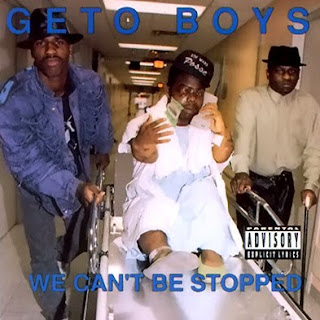 Hip-hop groups were a hot topic for moral-minded politicians during the early 90s, and several leaders used the Geto Boys as an example to decry the state of modern pop-oriented music. The fires were fanned in 1991 with the release of the group's third proper LP, We Can't Be Stopped. Before the release of the album, Bushwick Bill had lost an eye in a shooting incident with his girlfriend, and the cover featured Willie D. and Scarface wheeling Bushwick Bill into an emergency room, with a prominent shot of the damaged eye.

Inside the album, proceedings were among the most extreme in the history of American recorded music. Obviously, radio airplay was non-existent, but We Can't Be Stopped was still certified platinum by the RIAA in early 1992—thanks to the underground hit "Mind Playing Tricks on Me," one of the most effective inner-city vignettes in hip-hop history.

Bushwick Bill did not approve of the photo being used for the cover. im not exactly sure what the deal was.. look it up yourself. all i know is there was words about it.


The Geto Boys - We Cant Be Stopped