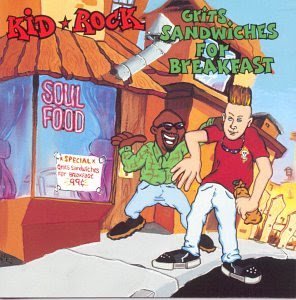 On December 11, 1990, Kid Rock released his debut album Grits Sandwiches for Breakfast on Jive Records. The lead single "Yo Da Lin In The Valley" was banned by the FCC for its fixation on oral sex, and received at the time the largest non-commercial radio fine of all time at $23,750 fined to SUNY Cortland Radio (WSUC-FM). Jive released Kid Rock from their roster in 1991. It was during the height of the 2 Live Crew censorship trial and they deemed Kid Rock's album too dirty.

He would meet Uncle Kracker in 1991 after battling Kracker's brother in a rap battle back in Clawson, Michigan. Kid Rock eventually asked Uncle Kracker to become his full time DJ, although at the time he had no clue how to play them.

Grits Sandwiches sold 100,000 copies upon its initial release. Atlantic Record won the rights to the record in 2000 and re-released the album.