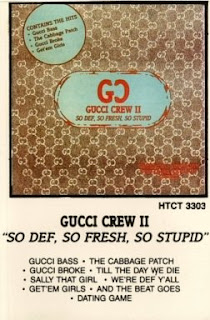 The Gucci Crew II was a Miami Bass group popular between 1986 and 1994. The group was made up of MC V and TFS (aka 240 Shorty), along with Disco Rick, who was their DJ early on.

As Amos went into semi-retirement for a few years, Disco Rick assumed the role of producer. They released the album "So Def, So Fresh, So Stupid" in 1987, which became a hugely successful album locally on the heels of 2 Live Crew's debut album. The success was only heightened as the campy single, "Sally, that Girl", caught fire outside of Florida that same year, which over time proved to be their signature song.