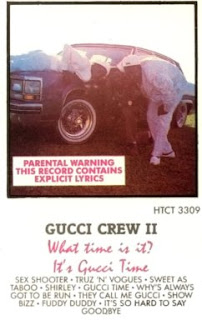 In 1988, the trio released "What Time is It? Gucci Time" and was quickly embraced by the emerging car audio bass market. Tensions arose as the final version of the album featured a parody of Doug E. Fresh's "La Di Da Di", which went against Disco Rick's wishes. As a result, Rick left the unit to form "The Dogs", and Gucci Crew suddenly found themselves without a DJ and producer.