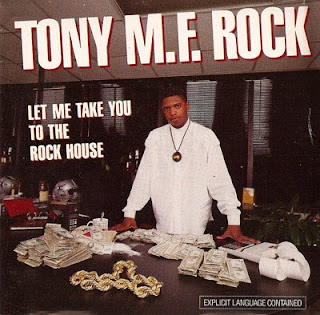 In 1988, MC Shy D linked up Tony M.F Rock to Skyywalker Records or maybe just luke records, (depending on when the infringment case was filed from George Lukas.) Anyway Luke records released Tony's debut single, "She Put Me in a Trance" Featuring Shy D backed with "Still Doing It." The single did well enough that Mr. Mixx brought Tony to Miami to make a full record, which was released in 1989 as Let Me Take You to the Rock House.

This Album is a document of a time where hip-hop was uncertain of its next move. Maybe Southern rappers would prove their lyrical dominance: "P.W.Y.P. (Practice What You Preach)" compellingly argued that case. Maybe hip-hop would become sexy: the title track here is an exercise in the short-lived (and underappreciated!) hip-house sound, a logical partner to Miami's bass scene.
Or maybe it would become really hardcore: "I'm That Type Of Nigga" was a thugged-out answer record to LL Cool J's super-slick come-on "I'm That Type of Guy."
Tony Rock reinvented himself as Woodchuck, the bass player in the Atlanta live rap-rock group El Pus. In 2005