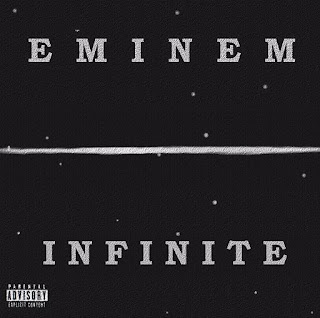 Infinite is the debut studio album by American rapper Eminem, released independently in 1996 by Web Entertainment. The album was recorded and produced in 1995, with help from The Bass Brothers and fellow D12 members Kon Artis, Proof and Eye-Kyu, along with fellow Rappers Thyme of 5 Elementz and Three.

So he does what every artist does passes out his album for what ever he can get out of it..
5 bucks.. dont have 5? You got 3? no? well hell i'll take 2 bucks then. And in some cases free just to put the name out, what ever it takes. Then he sends this tape to Dr Dre . Dre Liked what he heard and flew Em' to L.A And the rest is written in the books. And who knows if this is the real cover for this? Did Independent albums even have covers in 96? I dont know... i was to busy listening to 2Pac's All eyes on me..

I did have relapse posted up. but its gone now. the blog post and the file link.. crazy. maybe he wants to make some dough off of it..