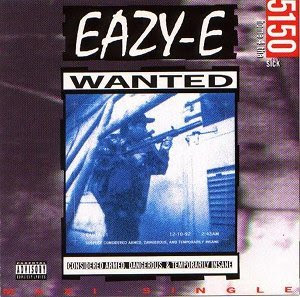 The five songs on 5150 unfortunately don't do much to reclaim Eazy E's once mighty stature among the Gangsta Rap scene, especially since "Intro: New Year's E-Vil" clocks in under a minute and "Merry Muthafuckin' Xmas" is a novelty. The remaining songs ("Only If You Want It," "Neighborhood Sniper," "Niggaz My Height Don't Fight") are thankfully good and, above all, curious for how they differ in style from past work, which had been exclusively produced by Dr Dre. Three good songs isn't much more than a teaser, however, or more cynically, a stopgap. Overall, there's not much to 5150 Home 4 tha Sick (which, to be fair, prints "maxi-single" in large print on the cover)