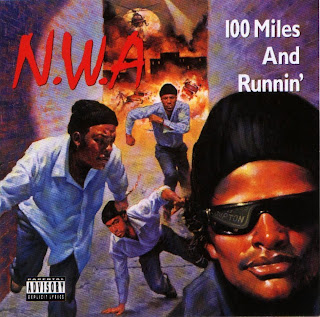 100 Miles and Runnin' was the first N.W.A. album after Ice Cube had left the group a year earlier, and the group makes numerous sardonic references to its former member. On the title track, Dre states "It started with five one couldn't take it / So now there's four 'cause the fifth couldn't make it" to dismiss Ice Cube as a coward, and on the song "Real Niggaz" MC Ren states "Only reason niggaz picked up your record is cause they thought it was us", referring to the success of Ice Cube's first solo album Amerikkas Most Wanted which had been released earlier that year. Ice Cube would respond to these attacks on his 1991 album Death Certificate.