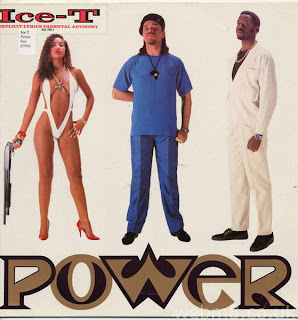 The legendary gangsta hip-hop emcee Ice-T was born Tracy Marrow on February 16, 1958, in Newark, New Jersey. He moved to Los Angeles, California, to live with his paternal aunt after the death of his father while he was in the sixth grade; his mother had died earlier when he was in the third grade. His aunt lived in the South Los Angeles district of Crenshaw, colloquially referred to as South Central. He became immersed in the street life of the inner-city and eventually became a member of the West Side Rollin 30s Original Harlem Crips.

As riveting as Rhyme Pays was, Ice T did hold back a little and avoided being too consistently sociopolitical. But with the outstanding Power, the gloves came all the way off, and Ice didn't hesitate to speak his mind about the harsh realities of inner-city life. On "Drama," "Soul on Ice" (an homage to his idol Iceberg Slim), "High Rollers," and other gangsta rap gems, Ice embraces a first-person format and raps with brutal honesty about the lives of gang members, players, and hustlers. Ice's detractors took the songs out of context, arguing that he was glorifying crime. But he countered that, in fact, he was sending out an anti-crime message in a subliminal fashion and stressed that the criminals he portrayed ended up dead or behind bars. Another track that some misconstrued was "I'm Your Pusher," an interpretation of Curtis Mayfield's "Pusherman" that doesn't promote the use of drugs, but uses double entendres to make an anti-drug statement.