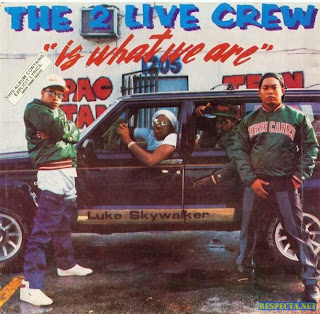 The 2 Live Crew Is What We Are
is the first album by hip-hop group the 2 live crew. It was released in 1986 on Skyywalker Records just to a great deal of controversy and promptly was certified gold by the RIAA. It includes the hits "We Want Some Pussy," "Throw the Dick," and "Cuttin' it Up." Bob Rosenberg, a south Florida DJ who would later form the dance-pop group Will To Power, remixed and edited the song "Beat Box". In Florida it was deemed obscene, and one store clerk was charged with Felony corruption of a minor for selling it to one 14-year-old girl. The clerk was later acquitted.

this original 1986 release  You can  see the Luke Skywalker on the side panel of the truck, His name.
before George Lukas started crying.
The 2 live crew was responsible for the creation of that advisory stamp you see on many explicit albums today. and for the right to free speech in press. nice... i quote Luther Campbell "censorship is unamerican"
However today " explicit" means now one cuss word can deem an album " explicit"
Fuck them , fuck us and you. buy my fuckin albums

Get " As Nasty As They Wanna Be" Here