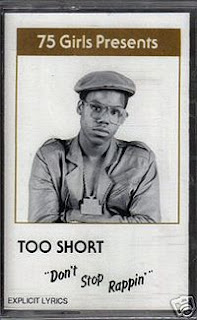 Don't Stop Rappin' is the debut album by Too $hort, released in 1983. It contains the original version of the song "Playboy Short". The Born to Mack album contains the Second Version, or part 2 if you will. i slept on this tape in the 80's but found out about it in the late 90's im thinkin. but by then life is... , short dogs in the house and all them was around so this tape did nothin for me. however i came across it here recently and thought id share it. For an old school music collector this is a great addition to the arsenal. If we dont keep the classics alive... who will?

Email ThisBlogThis!Share to TwitterShare to FacebookShare to Pinterest
Labels: Too Short