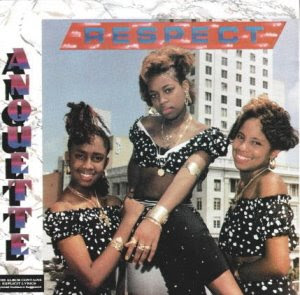 Anquette (An -Key -Ette) is a Miami Bass female rapper from Miami, Florida, U.S., backed up by the Throw the P Girls through the high points of her career. She debuted with her answer version of the 2 Live Crew's "Throw the D", namely "Throw the P" (1986). Anquette's debut LP Respect(1988) featured a version of Aretha Franklin's "Respect" as well as an R&B hit ("I Will Always Be There for You", which peaked at #76 on Billboard's Hot R&B/Hip-Hop Singles and Tracks chart in 1989 and a rap track dedicated to Janet Reno.

Other noteworthy tunes include "Ghetto Style" and "Shake It (Do the 61st)". Anquette came back in 1997 with the tune "My Baby Mama", an answer rap to B-Rock and the Bizz's "MyBabyDaddy".

Email ThisBlogThis!Share to TwitterShare to FacebookShare to Pinterest
Labels: anquette