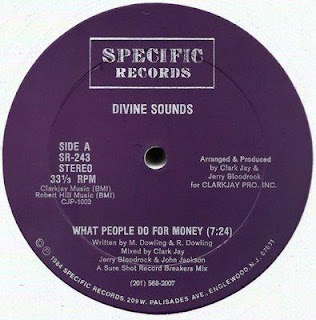 Divine Sounds is an old school rap group from Bedford-Stuyvesant, Brooklyn, New York.
Members, DJ Mike, Disco Richie and Shelton D, they hit the block in the mid 80's with What People Do For Money..

Before Divine Sounds made it into the recording studio, DJ Mike was frequently seen playing music in Bedford Stuyvesant, a neighborhood in the central portion of the New York City (a.k.a) Bed Stuy and Lafayette park where he brought funk into hip-hop. DJ Mike Music is also thought to be the first DJ to rap on a record.

But then again i dunno, I'm always reminded of DJ Slick Vic of the Jam Pony Express DJ's . Est. 1981. He treated the mic like a monster would treat kids at Disney World. I got hip to divine sounds thru the JPE DJ's..