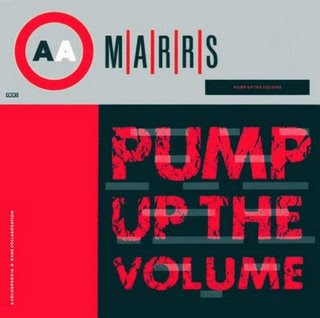 MARRS started in 1987 as a collaboration between the groups A.R. Kane and Colourbox, with additional input from DJs Chris C.J. Mackintosh and Dave Dorrell. However, the collaboration did not go entirely according to plan. Once in the studio, the groups' different working methods and personalities failed to click. Producer Jon Fryer found himself in the middle and unable to resolve the conflict between the two camps. The result was that instead of working together, the two groups ended up recording a track each, then turning it over to the other for additional input.

This record was released under the alias MARRS, an acronym derived from the forenames of the five 4AD artists involved in the project: Martyn, Alex Ayuli, and Rudi Tambala (from A.R. Kane); Russell Smith (an associate A.R. Kane member); and Steve (from Colourbox).

Email ThisBlogThis!Share to TwitterShare to FacebookShare to Pinterest
Labels: marrs