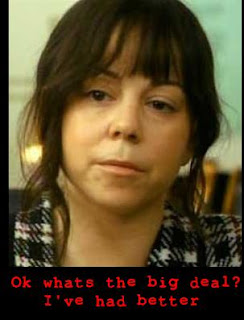 Mariah Carey is spitting mad at her alleged ex-boyfriend Eminem because he is supposedly playing personal messages she left the rapper when they were "dating" during his recent tour. Carey, for her part, has always denied that there was ever a romantic relationship between the two. The two were alleged to be dating in 2001 when he worked on her Charmbracelet album. In 2002, Eminem finally admitted there was something going on. He said then, "There is truth to the story. Now I respect her as a singer, but on a personal level I’m not really feeling it." Ouch.

Reportedly, during his recent Anger Management tour Eminem plays a clip of Carey’s hit "We Belong Together" and then allegedly plays a clip from one of Mariah’s voice mail messages that says, "I heard you were getting back with your ex-wife. Why won’t you see me? Why won’t you call me? You’re not calling me." He then pretends to vomit and starts singing his hit "Puke."

Don’t get on Eminem’s bad side — it’s not a good place to be. That’s the lesson Mariah Carey and her husband Nick Cannon are learning in the harshest way possible with the release of the rapper’s new diss track against the couple called “Warning.”

In the track, produced by Dr. Dre, Em raps about his disgust over Mariah denying their brief relationship and portrayal of him in her latest single and video “Obsessed,” although Mariah has gone on record saying neither is about him.

Email ThisBlogThis!Share to TwitterShare to FacebookShare to Pinterest
Labels: Eminem