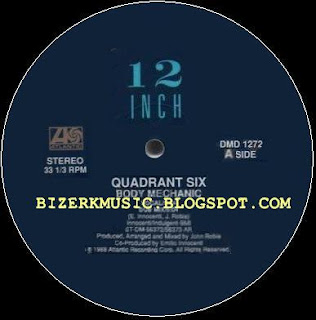 Just like Soul Sonic Force's "Planet Rock," Planet Patrol's "Play at Your Own Risk," C-Bank's "One More Shot," and Jonzun Crew's "Space Is the Place," Quadrant Six's "Body Mechanic" was, in part, the work of Arthur Baker associate John Robie (the writing credits on the release also go to the less-known E. Innocenti). Quadrant Six only produced the one 12"; released in 1982 on Atlantic, it peaked at number 25 on the clubplay chart and has since become one of the better-known electro singles. "Body Mechanic" has been included on numerous retrospectives since its release, including the fourth volume of Tommy Boy's 1995 Perfect Beats series